In the hills of the Sorrentine peninsula in Italy, on donkey paths between whitewashed villages, I met an English gentleman 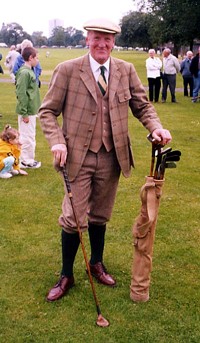 who was part of our walking group. Once he discovered that I was a Canadian golf superintendent, he poured his heart out.  He was a committee man, he said, on an 18-hole course in England. He had even served as green chairman at one time. As we walked through the picturesque Italian countryside with views of the azure blue Mediterranean sea, he told me a familiar tale.

His club in England had experienced a substantial increase in play and decided to renovate its golf course. The construction company they hired persuaded the committee that an architect would not be necessary, since the contractor invariably changed the best-made plans of architects anyway. A decision was made to lengthen some of the holes as part of the renovation.

On the first hole, a new green was built some 50 yards beyond the old one. Thus it was possible to continue play on the old green while the new one matured. But all golfers are impatient and English golfers are no exception. The new green was put into play far too soon with the result that turf quickly deteriorated.

Additional greens were built and the golfers played on several temporary greens for much of the first season of the renovation program that was to be completed over a three year period. Meanwhile the condition of the old course began to deteriorate for lack of attention because of the construction work. Important maintenance work was left undone. The sand bunkers in particular suffered. It was all the fault of the greenkeeper, the contractor said, and the committee listened.

After several written warnings, the committee sacked the greenkeeper.  The less-qualified assistant was promoted and a consultant was engaged one day-a-week to help. More than a third of the renovation program remained to be done. My new friend, the committee man, was facing yet another summer of discontent on temporary greens. Where had they gone wrong, he wondered?

I patiently explained that renovation work on a golf course should never be attempted without direction of an experienced architect, regardless of the assurances offered by the contractor…

As we climbed the narrow stairs of Positano, walked on cobbled streets in Pompeii, and stood on the ruins of Tiberius’ villa on Capri, the fate of my unfortunate sacked colleague in England weighed heavily on my mind.

“What could we have done better?” the committee man asked. I patiently explained that renovation work on a golf course should never be attempted without direction of an experienced architect, regardless of the assurances offered by the contractor.  So much can go wrong, and so much had gone wrong. The golfers had suffered from inferior playing conditions and a man had lost his job needlessly… all because of an unscrupulous contractor.